How Mental Models Prevent Organizational Change: The Tragedy of the Greenland Settlers

What prevents the transformation of organizations? More generally, what prevents us from changing in the face of a changing environment? There are many causes, but among them is the way we perceive the world and how we perceive ourselves, i.e. our mental model. The importance of mental models is particularly exemplified in an important historical case, the disappearance of the Norwegian colony of Greenland.

The Norwegians colonized Greenland in 984, establishing several settlements there. After a flourishing period, the colonies gradually declined until around 1400, after which all evidence of the colony disappeared. Archaeological excavations have shown that the inhabitants died of hunger and cold, eating their dogs and young animals in the end, burning everything that could be burned for heating.

They starved to death despite living by a sea teeming with fish and seals that were easy to fish. And yet, fish consumption, which was very low at the beginning of the colony, only gradually increased to represent 80% of the diet in the end. But it was too late. 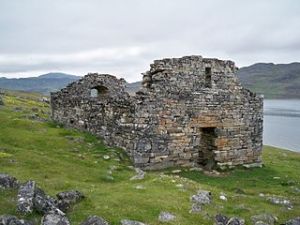 Identity stronger than hunger: Hvalsey Church from which came the last signs of the Norwegian colony (Source: Wikipedia)

The collapse of the Norwegian settlement is all the more surprising when knowing that the Inuit, the historical inhabitants further north, had adapted perfectly to the circumstances even though they too experienced difficult times. The Inuit were excellent fishermen. We know that there were contacts between the two populations, so the idea of fishing was not only not difficult to imagine, but the example of the Inuits was there to show its value. And yet it took 400 years for the settlers to take the step that seems so obvious to us, to transform themselves from cattlemen, who had no future there, into fishermen.

What explains this stubbornness? In a word: the European identity and the mental model it implies. As settlers, the Norwegians despised the Inuit, whom they considered primitive. Not surprisingly, relations were not good between the two populations, and everything the Inuit did was de facto considered suspicious. The refusal to adopt Inuit practices, although they were experts in survival in this hostile environment, had become a hallmark of the colony and part of its identity. Very few Inuit objects were found in the excavations. There were virtually no mixed marriage.

This behavior is not irrational or stupid: Isolated at the borders of Europe, it was important for the settlers to affirm their European and especially Christian identity in order to maintain a vital link. The construction of churches thus became very important, mobilizing resources that were scarce: hands, which were then lacking for harvests, but also stones and especially trees in huge quantities, which led to a strong degradation of the ecosystem. For a long time refusing to eat fish, the settlers persisted in developing cattle breeding, even though it was very unsuitable for the climate, because they saw themselves as peasant-breeders. The construction of stables, a source of prestige in a breeder’s culture, thus wasted scarce resources.

It was also important for their survival that the settlers received help from the King of Norway and for this they had to have a bishop to remain a member of Christianity, which they obtained in 1118. All bishops were Europeans, and came with a strong European identity. They imposed a strict maintenance of Christian and European identity, preventing any mixing with pagan Inuit and imposing costly constructions.

To the end, this affirmation of their identity, a key to their survival in a world that seemed so hostile to them and in the face of repugnant Inuits, prevented the settlers from adapting to the reality of their environment, and from stopping to eat meat and turning to the abundant fish around them. Moving from stockbreeders to fishermen took an infinite amount of time because it required them to fundamentally change their identity, that is to say all the mental models that constitute it. The social and especially religious pressure to oppose it must have been very strong.

The same goes for organizations and human societies: radical change is not difficult because the external environment is misunderstood or invisible. It is often perfectly understood. Change is difficult because it fundamentally challenges what constitutes us. Henry Ford built his incredible success with the Ford T on a model that broke with the practices of the time: a simple and cheap car for everybody. In the 1920s the market evolved and customers wanted more choice. Ford refused this change and continued with his simple and cheap car, persisting in seeing the new world with his mental model of the old world he had created. The company went on the brink of bankruptcy before changing its model and recovering.

Thus the change of mental model is doubly difficult: it is difficult on the one hand because it implies a change in the deepest part of what defines us, and on the other hand because it is a question of changing what has made us successful until now, and perhaps continues to make us successful. We must therefore accept to sacrifice our current position and make a great leap forward. Imagine that the Norwegian colony, say around 1300, aware of the failure of its model, decides to change everything. It approaches the Inuits, all is forgiven, and becomes “native” to use a colonial term that has lasted until recently, and which reflects the horror felt by the colonist towards the one who adopted local customs. Bridges would have been immediately cut off with Europe and the change in lifestyle would certainly have caused trauma: women learning to sew sealskins for kayaking, men for fishing, and all together condemned by their religion. This is almost inconceivable. This explains why the adoption of fishing was so slow, and therefore could not save the colony.

The question for organizations is as follows: what can make this great leap forward possible? Or perhaps we can avoid this big leap and adapt gradually? In any case, any transformation program that does not take into account this central notion of a mental model is doomed to failure.

To learn more about mental models, read my article Collective Fiction or the Challenge of Transformation. See also: Why Transforming an Organization is Difficult: Resources, Processes, Values and the Migration of Skills.

3 responses to “How Mental Models Prevent Organizational Change: The Tragedy of the Greenland Settlers”